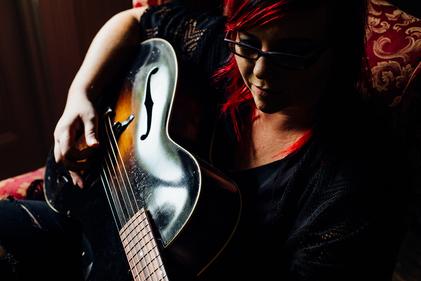 Watch out for the patented Allison Forbes Bullshit Meter. It might be as handy a device to have in your house as Forbes’ debut album, Bonedigger, a record which is frank and direct about herself and the world around her.

“I’m a pretty good judge of character and of music and I’m very open,” says Forbes, forthrightly, of course. “I don’t give anyone any bullshit, because life’s too short. It doesn’t need to be that hard.”

All through the gutsy, powerful Bonedigger, Forbes lays out reasons to care about how you live, how you treat others, but especially how you treat yourself. Coming out the other side of busted hearts and busted lives, wise choices on mental health, reminders to enjoy yourself however it plays out - it may be a debut but it sounds like it was made by someone who knows who she is and what she can do.

Someone who can sing “There’s ghosts in my head, shadows in my bed”, not as complaint but openness about learning to live with your past.

“I feel like I’m in a stronger place as a person and as an artist, where I’m happy not to compromise at all. I’m past the point in my life where I need to worry about whether I’m going to be played on TV or radio, I just wanted to make something that was true to the music.”

And the music holds true for the Wee Waa-born singer/songwriter, who spent the first half of her life in Tamworth. Drawing from country music for sure, but happy to take in the sound of guitars hardened up by anger and rock’n’roll, the shapes of songwriters who looked inwards even as their melodies floated higher, and even, oh yes!, some nautical folk.

All of it moulded by ARIA-winning producer Shane Nicholson, a regular sparring partner since her first EP in 2013.

“I’ve been around but I never had confidence in my music at all and Shane turned that around for me and gave me belief,” Forbes says, adding that he recognised a need in her that wouldn’t be talked away.

“I always want songs to be perfect. I can’t see the point in rushing something out, just because you haven’t been around for a year or two years or whatever. It’s about the quality of songs, being the best they could possibly be. He understood the songs so well and his musical genius is incredible. He could hear things in the song that I couldn’t even hear.”

Importantly, he understood her need to make a record that sounded even tougher than her two EPs, “more Gretsch” as Forbes describes it with a laugh.

Even a cursory run through the album would tell you that Forbes understands what it is to be isolated and without control. In these songs she is saying, you can feel like this and still do okay.

“Ever since I was a kid I struggled with fitting in, or knowing where I fit in. That’s been a constant theme through my whole life: I don’t look like a country singer, I like contradictions.”

Contradiction like the way the album flows from country to rock to bluegrass to something tougher, and then something wholly vulnerable. Like the way she may sound modern and city-fied and nothing like the old school country, but yet still connected to what matters.

“I grew up a huge fan of bush balladeers, I am a huge fan of John Williamson: I love that people can sing about our country like that,” says Forbes. “Also I love that he is a bit of a prick because he stands up for what he believes in and doesn’t give a f**k what anyone says. Love that.”

That’s what you get when you’re dealing with an artist who doesn’t just know her craft but knows herself. And knows there’s no room for bullshit with either.